This week the wisdom comes from the littlest of our bunch - Noelle - in a video.


Even at such a young age, 4 1/2 months, she is a very wise girl. I'm not sure exactly what she's trying to tell us, but I just know that it's smart. You see, Noelle is very wise, like her daddy, but thoughtful like her mom. With these two qualities, in perfect proportions, she will be unstoppable!

Really though, Noelle started jabbering like this within the last week. Each day she's doing it more and more - we simply can't get enough. This morning while the hubs and I were making our breakfast, we listened to Noelle  over the monitor talk to her room about her dreams (we think). They sounded like really fun, happy dreams. I wonder what they were about? Nothing this girl says ever sounds sad, she is the most positive little ray of light I know.

Email ThisBlogThis!Share to TwitterShare to FacebookShare to Pinterest
Links to this post
Labels: slivers, thought of the day, videos

This year our "spring break" trip happened a bit earlier - February - and sadly without daddy :( Noelle and I headed to south west Florida on our own to visit Cammy and TBD for a week earlier this month.

It was her first plane ride, and she was an absolute champ. Before getting on the plane I had determined that I wanted a front row seat to have extra leg room for us (we fly Southwest, so get to pick). We were able to snag the last front row seat on the plane thanks to our 'A' group seating. This was, though, not without a death stare from every person around us. Their eyes were screaming at me "DO NOT SIT HERE WITH THAT BABY!" Boy did she prove them wrong. Asleep before takeoff, quietly ate and played for the remainder of the flight. We actually got quite a few stares because people were so shocked at how well behaved she was. 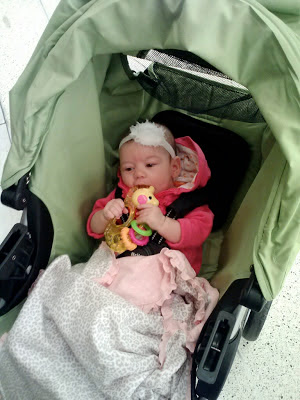 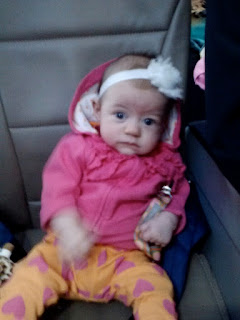 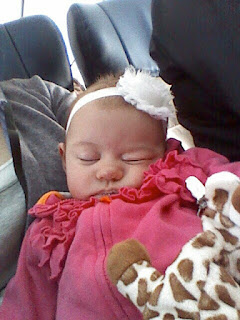 Upon our arrival in Florida Cammy and Auntie ML retrieved us from the airport, picked up lunch at Chick-Fil-A, and headed to our home for the week. We got settled at the condo, and Cammy and TBD couldn't wait to show off their grand baby to all of their Florida friends. So, we loaded baby girl into the stroller and took a walk around the community. 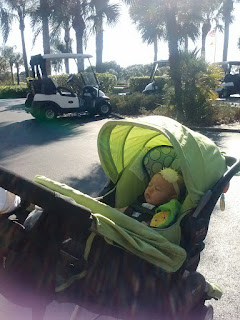 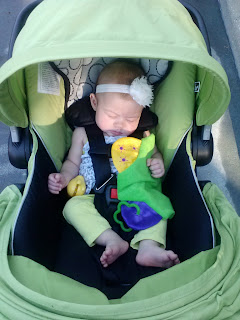 During the rest of our trip there was a lot of alligator wrestling ... 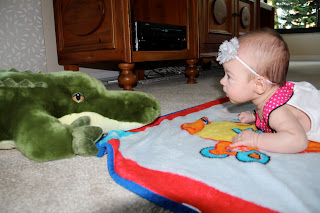 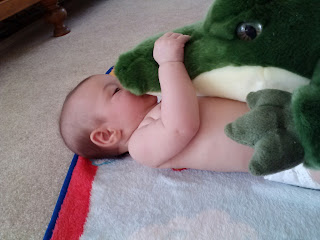 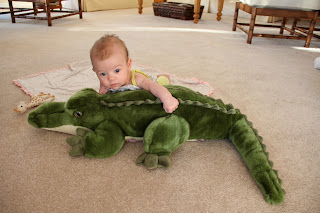 Shopping at the outdoor mall ... 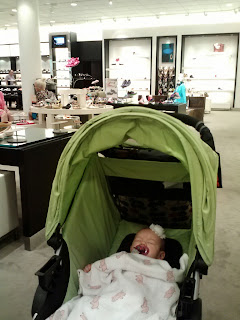 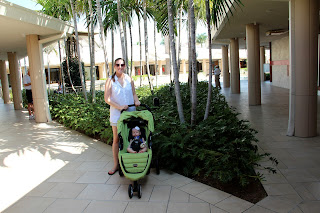 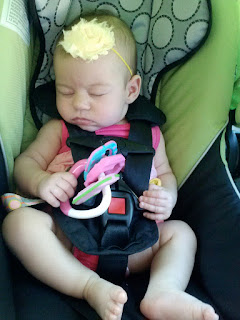 And, simply enjoying the Florida sun!

We went swimming for the first time, too! 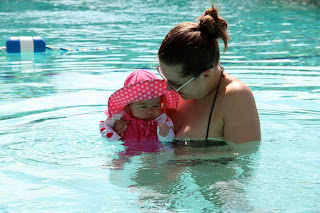 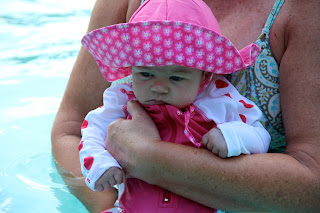 Finally, we had our first little giggles. The cutest.thing.ever.


And, we did it all without socks on. Why you ask? Because "if you're not barefoot, you're overdressed!"

In my 'Noelle's Fourth Month' post, I mentioned that she likes giraffes. Somehow in all of our coordinating, decorating, and buying things in the theme of owls and birds, a giraffe snuck in there, and now it's her favorite animal.

First, for being such a brave girl at her two month check up, Nene and Da got her a plush giraffe rattle from the Wynn. She totally loves this toy. I had originally named him Mr. Raffe (I'm not creative), but soon that changed.


Two months later, before our vacation to Florida (keep staying tuned, I will post about this), I decided to get Noelle a new toy to entertain her during our flight. Every kid has to have a Sophie Giraffe from Paris, right? I found a deal for a Sophie + giraffe Wubbanub (pacifier) and was sold!


While plush Sophie is a rattle, Sophie squeaks when you squeeze her. To make our lives more chaotic  squeeze Sophie when Halas is near, and he'll grab her by the neck and claim her as his! Not to worry, she gets thoroughly sanitized before she's returned to Noelle, and she puts Sophie right into her mouth. Luckily Halas hasn't made it too far with her! Plush Sophie also gets a good bath on a weekly basis since Noelle likes to eat her ears. Sophie (of the Wubbanub variety) is the calmest of the three, and only hangs out with Noelle at bedtime. However, he can be found being used as a helicopter to try and propel her right out of her crib at night : )


Wanting to get in on the giraffe theme myself, I couldn't resist these $20 shoes from the Gap! 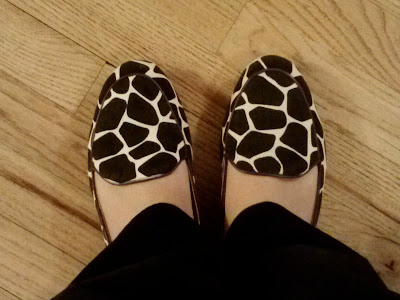 This summer I can assure you we will go to the zoo so Noelle can see a real live giraffe in person. And, don't look at us funny when we refer to them as Sophie, ok?

Here we are, into our fifth month and more and more I can't believe how quickly time has passed. The fourth month was a pretty big one for Noelle. She grew a ton (we'll find out exactly how much on Thursday at her check-up), took her first airplane ride (stay tuned for another post on this one), and really just blossomed into more of a little person, rather than a bitty baby.

This month I thought I'd show you some of Noelle's favorite things.

Although time is passing super fast, we are having so much fun with our little lady, and can't wait to see everything that she has in store for us this month!
Posted by Mallory at 2/16/2013 09:01:00 PM No comments:

Email ThisBlogThis!Share to TwitterShare to FacebookShare to Pinterest
Labels: slivers

Recently I added a page to my blog for some of my favorite Etsy shop owners. I thought that, here and there, I might do a little spotlight post for them, too!

Around the one to two month mark I was getting a lot of comments from strangers (nice comments) about my "cute son." Well, we were just not going to stand for that, so headband shopping I went! I found one shop, Cutenessbuns, where I have done all of my headband shopping since then. 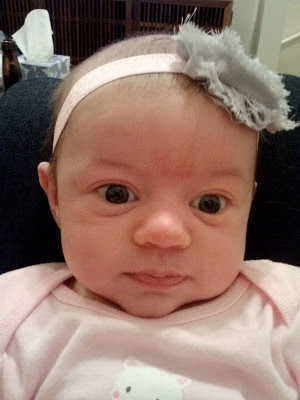 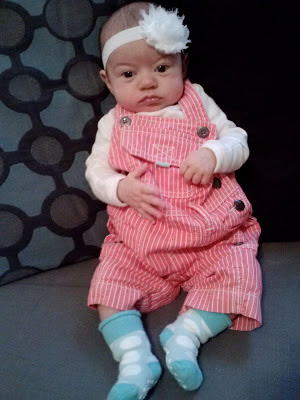 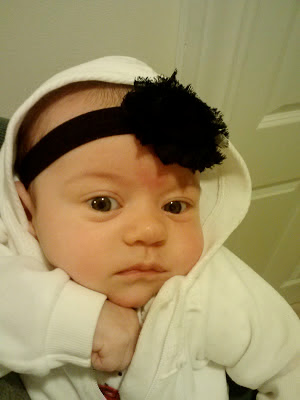 Husband hates headbands. He thinks they dent the babies head. Obviously, they do not, but I wanted to find a headband that was not only cute, but soft and "dent proof." When Noelle was smaller, I purchased the wide band kind since her head was a bit more fragile than it is now. My most recent purchase (since she's growing out of those) was all skinny elastic bands. Either way, none dent the babies head! 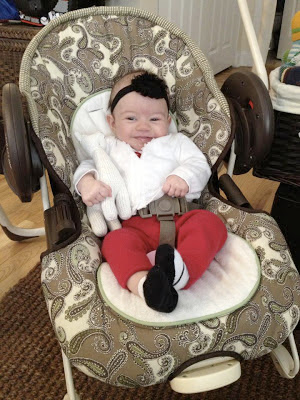 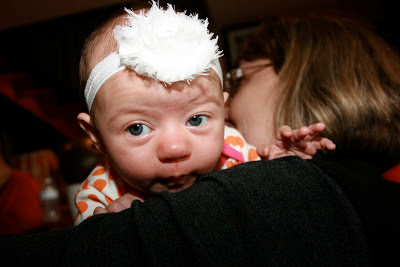 I love the selection and variety that Cutenessbuns creates. There are some special for holidays, some with one plain flower, and others with multiple flowers and pearls. They make a variety of colored flowers too so not everything is bright pink! This is my favorite part, probably. We have some very neutral clothes for our little girl, and her grey and navy headbands are the perfect accessory! 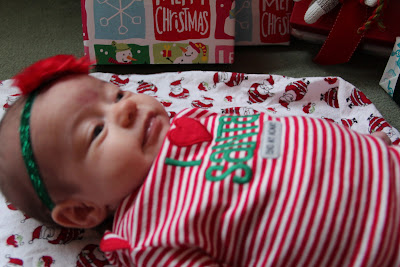 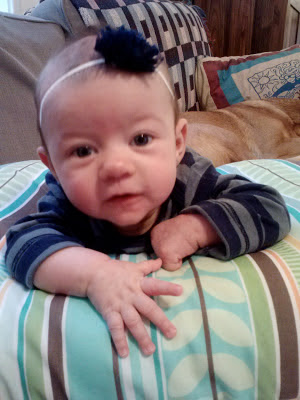 I hope you all check out the Cutenessbuns on Etsy. It is absolutely one of my favorite places to shop for our favorite lady!
Posted by Mallory at 2/02/2013 10:04:00 PM No comments: 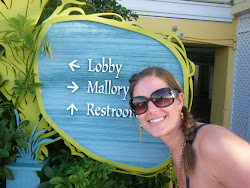